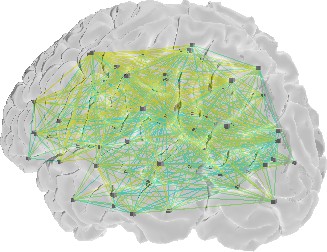 The human brain is without doubt one of the most fascinating works of nature. It is a complex network of about 86 billion neurons, with each neuron possibly being a complex machine itself. There are ongoing efforts for obtaining both micro scale and macro scale connectomes of the human brain. Brain graphs of about 1000 nodes are already possible to calculate. These graphs describe connections between cortical and subcortical areas.

Why is it important to understand the human connectome?

A very popular reason is that if we could fully understand the human brain, it would enable us to create artificial brains which could, after further development, surpass human intelligence and make our lives better. A more technical reason is simulating the effect of drugs on the working of the brain. However, simply knowing the graph is only one step towards these goals, as we know little of the actual computational power of the individual neurons. On one hand, our ability to simulate the brain depends on our knowledge of the network of the neurons, but, on the other hand, we have to understand the neurons themselves which is a fact often overlooked by those speculating about the future of AI.

PIT Bioinformatics Group mapped the macro scale connectome of a great number of subjects using the MRI scans on Human Connectome Project. You can view and download these connectomes from these pages:

One of the most well-known project concerning the connectome (brain graph) of humans is the Human Connectome Project. Here one can find a vast number of MRI scans of the brains of healthy individuals of various age and sex.

The Human Brain Project is a large-scale European megaproject aiming for a neuronal connectome. The main goals of this project is better understanding of the brain along with the simulation thereof for in-silico drug testing and neuromorphic computation.

The network of the brain